At time of posting (21 March 2021), a new wave of coronavirus is sweeping across Europe. Vaccinations have been going rather slowly, with only 10% of the population having received their injections.

I am quite frankly appalled at the complete lack of international collaboration and cooperation. Each little nation sparring for itself, without due regard for the bigger picture. After all, this is a pandemic, and virtually all countries in the world are affected.

The same happened in the UK, at the start of the pandemic, where the three devolved administrations all did their own thing regarding tackling the emergency. In my opinion, hey ho, devolution should have been suspended and a government of national unity installed to fight this war. For war it is, although it is not being fought with bombs and bullets. Nonetheless, here in the UK, 125,000 people have already died.

The EU is squabbling with the UK over the supply of vaccines. Each EU memberstate does its own thing, particularly in terms of vaccinations. There is also talk of a cheaper version for developing countries, where the pandemic is also occurring. However, richer nations are deciding not to support that.

Where are the people that see the bigger picture? This is not about one country against another.This is about the whole world. Where is the United Nations?

Meghan is [word blanked out]. She knew in advance what club she'd be joining. When you join a club, you agree to abide by the rules. If she'd done her homework, she'd have known that it would be oppressively stifling to join the royal family.

Why on earth did she do so then? Colossal ego-trip, for one. She also saw Harry's vulnerabilities and played on them to manipulate him to her side - away from his family. Don't know what to think about that.

Whatever you think of the royals, they are Harry's family. He lost his mother when he was 13, and we all know what happened. Harry needs his family's support to cope - and she has sought to alienate him from that. Yes, they are stuffy and old-fashioned. You'll never change that. To enquire about expected skin colour of an unborn baby is a ghastly question to ask of a mother. However, on balance, I am anything but impressed.

This afternoon, I had to wait at the roundabout by Engebretsen for traffic to clear. One vehicle attracted my attention. A hearse, with a coffin. As it rounded the roundabout, I took off my hat and briefly bowed my head at the hearse. The driver acknowledged my mark of respect in likewise fashion before proceeding to the final resting place of the deceased.

In these days of Covid, people are only allowed to attend the interment in a graveyard by invitation. The general public are permitted to line the road near the person's last residence as the cortège moves off, but no such time or place was mentioned in this instance. Judging by the information in the funeral notice, I suspect that the gentleman in question had returned home (that is local parlance for coming back to the island) after his death, to be laid to rest in his native soil. I would be profoundly sad if it was the case that only a chance passer-by at a traffic roundabout and the undertakers were able to pay their final respects on the way. I did not know Mr Kenneth M. Macleod, who had lived in Carishader, Stornoway and Leith. May he rest in peace. 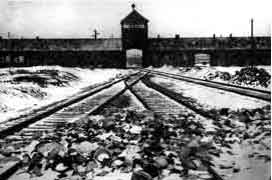 Today it is 76 years ago since the infamous Auschwitz-Birkenau concentration camp was liberated by Soviet forces. More than a million people, mainly Jews, were killed there during the Second World War. The process was conducted as an industrial process. To date, some of the goods left behind by the victims of the Holocaust remain on display. These include suitcases with name tags, spectacle frames, hair and shoes. I have never visited Auschwitz and am not likely to.

January 27th is Holocaust Memorial Day, remembering all the victims of the Nazi's policy of extermination of all those they considered to be sub-human.

We must never forget.

Email ThisBlogThis!Share to TwitterShare to FacebookShare to Pinterest
Labels: holocaust

On Tuesday 11 January 2005, we were about to experience the worst storms in 50 years. At 3pm, exactly as forecast, the wind whipped up to hurricane force. Powerlines went down all over the island, leaving people without electricity for anything between a few hours and up to 6 days. Property damage was widespread and severe.

Staying in South Lochs at the time, I lost power at 6.20 that evening, not to get it back for 48 hours. From the darkness, I could see blue flashing lights across Loch Erisort. Later, it became clear that this was the police, closing the A859 Stornoway to Tarbert road. A lorry driver had reported as sheep flying past his windscreen. The driver on the last bus into South Lochs had a terrifying time keeping his vehicle on the straight and narrow.

By 6pm, people in Stornoway were physically blown off their feet. Some sustained injuries as a result. Trees in the Castle Grounds were falling like match sticks, boats were ripped off their moorings and tossed onto the harbour wall at the Newton Basin. Flooding affected the town centre.
Down in the Southern Isles, a family of five found their home in Iochdar, South Uist, being pounded by pebbles and flying spray from the nearby sea. A flurry of phonecalls arranged a move across the causeway into Benbecula. Two cars would carry the grandfather, two parents and two young children across the few miles.

Dawn broke at 9 o’clock. The islanders, from Barra to Lewis, were mentioning that it had been a particularly nasty one, and people were comparing notes what damage everyone had sustained. A phonecall disturbed the sense of relief. People were reported missing in South Uist. A search party started combing the South Ford, which separates Benbecula from South Uist. The bodies of five people were found in the course of the next few days. They were those of a grandfather, two parents and their young children.

The funeral service, a few days later, was attended by 1,500 people, one out of every three islanders in the Southern Isles. Only 500 could actually enter the church, the rest followed the service outside, as it was relayed through loudspeakers.

Total damage was estimated to be worth £15 million, including severe storm damage to the causeway system stretching from Berneray to Eriskay. Repairs are only now being carried out.

This post is dedicated to the memory of those lost in the Iochdar tragedy.

I am profoundly perturbed by the scenes in DC last night. I am distressed at the death of demonstrators at Capitol Hill, irrespective of what they were doing there. Donald Trump is responsible for all of that and has disgraced the office of US President. It doesn't matter that he is Republican and that Biden's a Democrat. Incitement to civic unrest and violence, to violating the democratic institutions of his own country would lead to arrest of anybody else. He has done the USA a terrible service, and has defiled his own positive achievements over the past 4 years.
1 comment:

Email ThisBlogThis!Share to TwitterShare to FacebookShare to Pinterest
Labels: trump


Picture taken at 4.30pm, as the last light of 2020 fades into the southwestern horizon. A difficult year, currently grinding through its final hours. I am NOT expecting 2021 to be miraculously so much better as the clock turns past midnight. Many excruciating weeks still lie ahead for all of us, and judging by recent performance, worse than expected. Sorry to be going out on such a gloomy note. 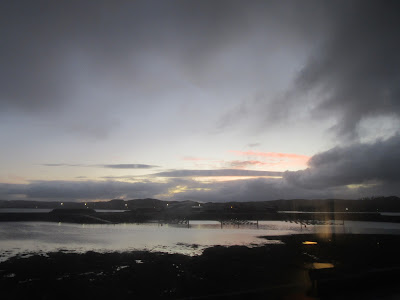